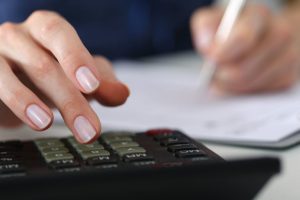 Human beings are habit-creating machines, craving any mental or physical shortcut that lets us focus on higher-level thoughts, such as what’s for lunch or developing theories about Netflix dramas.

Bad money habits are more difficult to steer out of than other automated behaviors like driving a car. Why? Financial peace of mind is a much more subtle reward than the satisfaction of navigating a half-ton piece of metal through city streets without death or injury.

Still, every person who is good at money learned good habits, which means you can, too. “What we know from lab studies is that it’s never too late to break a habit. Habits are malleable throughout your entire life,” Charles Duhigg, author of “The Power of Habit,” told NPR.

Here are seven financial habits you should break before you go broke.

1. Stop spending more than you earn

Who do you think you are, the U.S. government? America’s fiscal deficit is projected to be $559 billion in fiscal year 2017, according to the Congressional Budget Office.

How is your own personal deficit? About one in five Americans spend more than they earn and 38% break even, research from the National Financial Capability Study shows. Your goal must be to join the 40% of Americans who spend less than they earn.

Here’s how not to handle your obligations: When a collection agency calls, you pay the bill. This kind of financial firefighting only guarantees you’ll veer from crisis to crisis as your credit score burns.

Payment history carries huge weight on your financial future; more than one-third of your credit score is judged by your ability to pay your power bill, car insurance and credit cards on time. If you can’t, work out a payment plan with your creditor before it goes to collections.

Credit cards are a weapon in your financial arsenal. Like all armaments, they can be used in strategic defense or to shoot yourself in the foot. Too often, it’s the latter — the average U.S. household with credit card debt has $16,748 of it.

That plastic in your pocketbook is the greatest enabler of bad money habits, allowing you to spend on a whim and forsake all budget plans. Sticking to a budget should be your most faithful money habit.

Today, consumers must take control of their own financial lives, whether it’s understanding health insurance or guiding their own 401(k) plans to invest for retirement. Even so, during the rollout of the Affordable Care Act, many consumers struggled to understand basic health insurance terms such as “deductible,” a survey by the Kaiser Foundation found.

Learn the lexicon of finance to manage your money better.

“I used to catch myself saying, ‘Investing is hard. I just don’t understand it.’ This gave me permission to avoid learning how to invest,” wrote Ann Marie Houghtailing, author of “How I Created a Dollar Out of Thin Air.” “Now I say, ‘Investing is a skill. You just have to start small.’”

5. Stop making it hard to save

Old habits die hard, and one of the oldest habits is using checks to pay bills or make savings deposits. “Personal finance habits take longer to change than the way you might switch from one smartphone to another. That’s because money is so important to us,” Fred Davis, a professor of Information Systems at the University of Arkansas, told Marketplace.

Set up automatic transfers for bill payments. Also automatically have 10% or more of your paycheck sent directly to your savings account. These two steps will go a long way toward building good money habits and credit scores with little effort.

6. Stop complaining about your paycheck

Whatever energy you’re spending complaining about the size of your paycheck takes energy away from finding ways to improve your bottom line. Think you’re being underpaid? Negotiate a raise or at least talk with your boss to understand what’s needed to see a bump in pay. If you’re valued, your supervisor will see the implicit threat that you may leave for a higher-paying job. Start looking for that more lucrative gig while you’re at it.

In the meantime, investigate ways to build other streams of income and seek ways to improve your skills.

OK, money does bring happiness, but only to a point. Purchasing experiences and giving to charity have a much longer shelf life for our well-being, research suggests.

Replace bad habits with good ones

Breaking your go-to financial routines will take time and effort. Subbing in habits that improve your bottom line — paying bills on time, using technology and increasing your income and savings — will be worth the work in the long run.